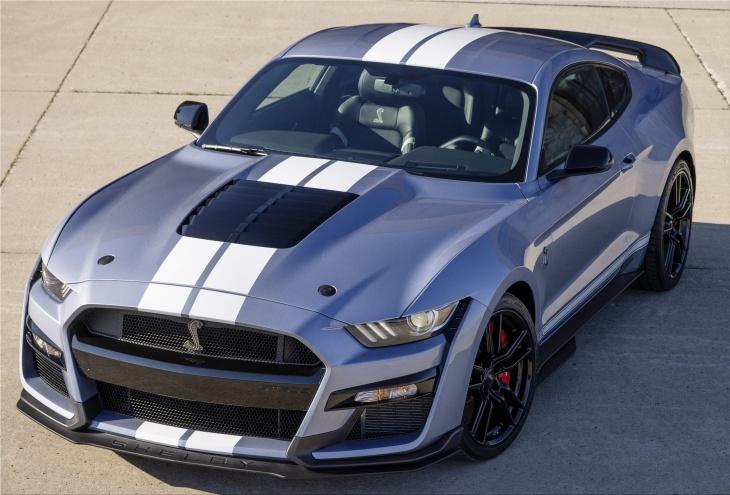 The 2022 Ford Mustang Shelby GT500 is the most powerful Ford Mustang ever built for the streets. The Shelby GT500 has a 5.2 V8 engine with an Eaton supercharger, with over 770 horsepower. Its performance from 0 to 100 km / h is estimated to be 3 seconds, with the top speed exceeding 320 km / h.

The powerfully 770 horsepower V8 engine used in the 2022 Shelby GT500 is individually assembled by hand! by a highly specialized team from the Ford Engine Plant in Romeo, Michigan. Only the best Ford engines are made here, known as the Niche engine line. Called the Predator V8, Ford built the most powerful engine to power a streetcar.

You can choose between 11 colors, and for the Rapid Red and Twister Orange options, you have to pay extra. You can also choose to paint the ceiling black.

There are three color options: Black, White, and Blue. In addition, you can choose between vinyl banners or banners painted directly on the body (an additional $ 10,000).

The most anticipated pack by 2022 Ford Mustang Shelby GT500 fans is the Carbon Fiber Track Pack, which includes:

Another novelty available to choose from in the 2022 Ford Mustang Shelby GT500 is the Technology Pack which includes:

Ford is adding a Heritage Edition package to the 2022 Mustang Shelby GT500 to celebrate its 55th anniversary. Since its introduction in 1967, the Ford Mustang Shelby GT500 has represented the peak of Mustang performance and continued building on the Shelby performance history. The American racer and entrepreneur Carroll Shelby pushed his renowned Mustang GT350 model further in 1967 to construct the first-generation Shelby GT500 with a modified 428-cubic-inch V8 inspired by his team's 1-2-3 finish at Le Mans.

Carroll Shelby described the first Shelby GT500 as "the first true automobile I'm proud of." The Shelby GT500 is as legendary now – as the most powerful and technologically advanced Mustang ever – as it was in its original incarnation 55 years ago. The limited run of 2022 Mustang Shelby GT500 Heritage Edition fastbacks will be dressed in a classic and distinctive Brittany Blue exterior color with two different Wimbledon White exterior stripe choices, paying homage to the original 1967 Shelby GT500.

Please log in to like, share and comment!
Sponsored
Categories
Read More
Health
Expert Tips To Help You Get Fit
It can be difficult to know what the best ways to get into shape.There is a lot of information...
By Diet Plan 2022-05-07 10:00:01 0 4
Other
Automotive Intercooler Market 2022 Size, Trends, Top Companies, CAGR Status, Opportunities and Forecast by 2030
Automotive Intercooler Market Scenario The Global Automotive Intercooler...
By Rohan Kkk 2022-01-28 04:21:09 0 18
Health
Ligament Stabilizer Market Demand, Insights and Forecast up to 2024
Ligament stabilizers have been playing crucial role in reconstructive surgeries particularly of...
By Pavan Ishi 2022-03-08 12:26:16 0 12
Sports
https://www.worthydiets.com/motex-energy-saver-reviews/
In some early capacitor designs, the conductors were metal plates or disks separated by nothing...
By Leaoh Jone 2022-01-04 12:41:59 0 29
Other
Titanium Reactor Market: Global Opportunity Analysis, Key Stakeholders and Industry Forecast 2021 to 2027
Global Titanium Reactor Market Growth 2021-2027 analysis with precise estimates and predictions...
By Akanksha Ingole 2021-11-02 12:44:21 0 42