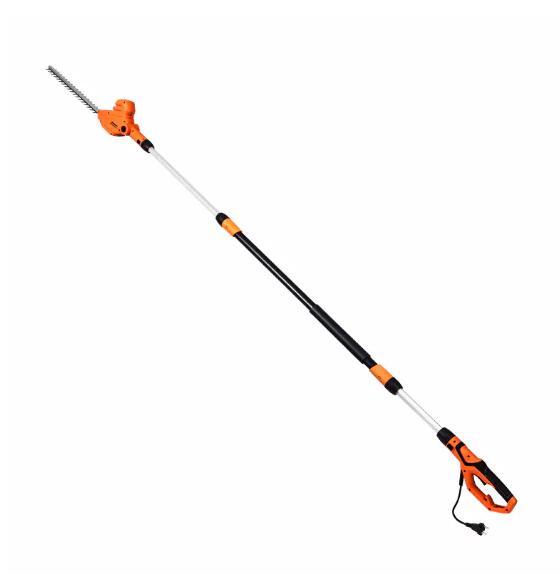 Want to saw up high, but worry that it's dangerous to use a chainsaw while standing on a ladder? Good thinking.

So how can you reach those high branches while keeping your feet planted on the ground?

Take a lightweight chainsaw, add a stick, and you get a pole saw.

While the idea of ​​a “chainsaw on a stick” might seem odd at first, it's quite a handy addition to anyone's landscaping arsenal. Just don't go trying to make your own with a broomstick handle, or you could end up with a serious injury.

Instead, consider buying one of the three kinds of pole chain saw you'll commonly find available:

Cordless Pole Saw Cordless pole saws draw on the power of a rechargeable battery. Depending on the saw and the type of battery included, you can expect to get between a half-hour to an hour of use from a single charge.

In the past, Ni-Cad batteries used to be common components of battery-powered saws. These days, lithium-ion batteries are considered standard due to their longer life and steady power output, even as the battery drains.

Because they're battery-powered, cordless pole saws provide the lowest amount of power of any type of pole chain saw. In exchange for lower power output, however, they offer other benefits:

The bars on cordless pole saws tend to be between 8" and 10" to allow users to trim small to medium trees. For the homeowner with a few quick, occasional pruning and cleanup tasks around the yard to take care of, a cordless pole saw is a convenient choice.

Corded Pole SawLike their cordless counterparts, corded electric pole saws typically use bars between 8" and 10" in length. Unlike rechargeable pole saws, corded pole saws draw their power from an electrical outlet and need to be plugged in via a cord.

The need to stay within 100 feet of an electrical source is one of the downsides of corded electric pole saws. But for those who don't mind staying plugged in, a corded saw offers plenty of advantages:

Low maintenance - like cordless saws, corded saws don't require you to change the oil or refill the fuel tank

Lightweight - because they don't have gas tanks or battery packs, cordless electric pole saws are lighter and easier to carry than other pole saws

Affordability - not only do the saws themselves come with budget-friendly prices; they also don't require you to spend money on replacement batteries or fuel

If you'd like to spend a little more time outdoors trimming your trees (and also want to spend less money), a corded electric pole saw might be the right choice for you.

Taizhou Oute Tools Manufacturing Co.,Ltd. not only has Telescopic Pole Saw but also Adjustable Tillers and other products, welcome to visit our official website.

Please log in to like, share and comment!
Sponsored
Categories
Read More
Literature
Purified Terephthalic Acid (PTA) Market – Industry Analysis and Forecast (2019-2027)
Purified Terephthalic Acid Market provide short term- and long-term growth, based on an...
By Sandip Jagtap 2021-10-21 06:50:42 0 62
Health
Power Keto Gummies Review – Get Your Hottest Body Yet With This!
Power Keto Gummies :- Power Keto Gummies conveys an impression of being a keto truly steady...
By TebiopKeto TebiopKeto 2022-05-02 06:03:03 0 18
Art
Efficient installation for correct soundproofing
Considering the basic types of materials that exist to avoid noise, installing any of these...
By Narendra Patel 2021-11-30 13:13:45 0 51
Other
Whey Market Share Outlook, Key Trends, Demand and Forecast to 2028
Surge in awareness about the advantages, for example, improvement in body quality, nearness of...
By Aakriti Verma 2022-07-07 06:53:41 0 12
Networking
3D Ultrasound Market GOAL AND future scope 2021
3D Ultrasound Market   3D Ultrasound is a volumetric imaging technology that...
By Aishwarya Patil 2021-12-06 06:04:40 0 53