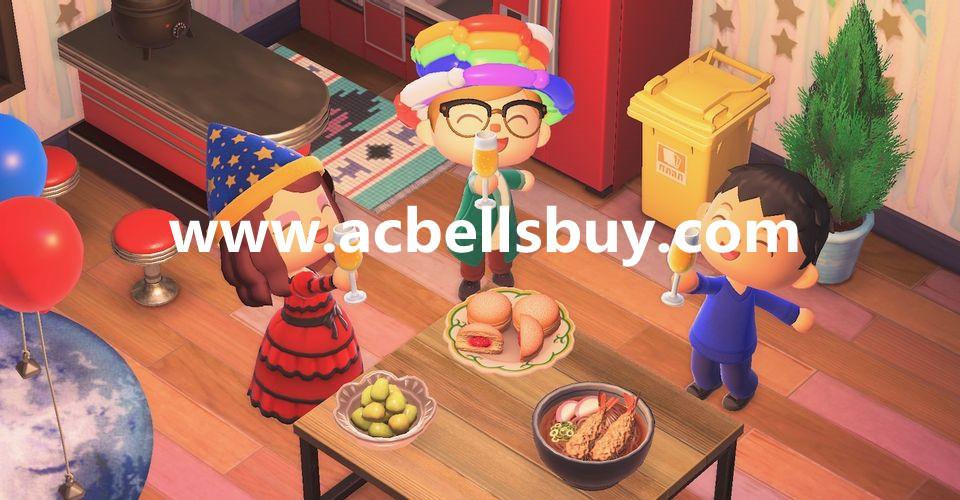 The new year is coming, and today is the 31st. To celebrate, Animal Crossing: New Horizons has launched new items. Today is the last time to buy Berliner, New Year's Noodles, and Twelve-Grape Dish. Have you already purchased it from Nook? On New Year's Day, you can unlock more items and a portion of traditional food.

Let's take a look at the price of these foods, the time of purchase, and the story behind them.

You can buy Berliner between December 26th and 31st. It comes from Sylvester, Germany. The filling of this pastry is jam, topped with sugar, similar to jelly donuts. Although this kind of dessert can be bought all year round, in Berlin, Pfannkuchen is a traditional German New Year's food. It is worth 1200 bells.

In the same time period from December 26th to 31st, in Animal Crossing: New Horizons, you can spend 1,300 bells to buy New Year noodles from ōmisoka, Japan, where many people celebrate the New Year and eat Toshi Koshi-soba. Year-passing soba noodles. This dish will bring good luck because the length of the noodles symbolizes longevity, and cutting the noodles means cutting off misfortune.

In Spain, people eat 12 grapes that represent good luck at midnight on New Year's Eve. This custom is: In order to bring good luck to the new year, eat one grape every time the bell rings. This means one grape per second, very fast. From December 26th to December 31st, New Horizons restaurant launched this dish with 12 grapes at a price of 1200 Bells.

Of course, the New Year party will not be without wine. The Sparkling Cider in Animal Crossing: New Horizons exudes its light, and players all over the world will love and be familiar with it. Players can take it to interact with friends, raise glasses, clink glasses for a toast. Then one smiled slowly with the sound, closed his eyes, and enjoyed the wonderful celebration time. The sparkling cider, also on the market from December 26 to December 31, sells for 1,000 bells.

From January 1st to January 15th, 2021, players of New Horizons can purchase Olivier Salad items with 1,000 bells. It is named after its creator Lucian Olivier and is a staple of the Russian New Year. According to most recipes found on the Internet, this dish is basically a potato salad based on mayonnaise, but also includes peas, carrots, onions, pickles, eggs, and chicken or ham.

Seize your last time to Buy ACNH Items, which food would you like?

Please log in to like, share and comment!
Sponsored
Categories
Read More
Health
Global Oral Chemotherapy Market
Global Oral Chemotherapy Market size was valued at US$ XX Mn in 2019 and the total revenue is...
By Rutuj Deo 2021-05-20 10:31:29 0 73
Games
Metal Nanoparticles Market Exhibits a Stunning Growth Potentials
Metal Nanoparticles  Market The qualitative and quantitative parts of an in-depth...
By Arti Ghodke 2021-11-17 13:56:30 0 14
Other
Paraffin Market: Industry Analysis and Forecast (2019-2027)
Latest report published by Maximize Market Research Paraffin Market. We would like you to get the...
By Chetana Gardas 2021-10-09 12:36:59 0 38
Games
5 Suggestions designed for Unprocessed Breast Magnification
lindos seios como aumentar o peito - In the event you need to snowball the broke through mass way...
By Michael Jordan 2021-08-25 13:28:07 0 50
Food
Mustang Dessert Waffles
Since time immemorial, waffles have long been a popular meal or dessert item. While its origin is...
By Mustangs Dessert 2021-07-27 17:26:06 0 54