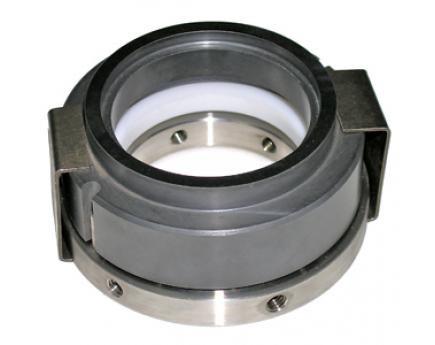 The reliability of the pump depends to a large extent on the mechanical seal. The mechanical seal is a device that prevents fluid leakage by keeping at least one pair of end faces perpendicular to the rotation axis under the action of the fluid pressure and the elastic force (or magnetic force) of the compensation mechanism and the cooperation of the auxiliary seal, which keeps fit and relatively slides. The elastic loading mechanism and auxiliary seal of the mechanical seal are the mechanical seal of the metal bellows, which we call the metal bellows seal. In light-duty seals, rubber bellows are also used as auxiliary seals. The rubber bellows have limited elasticity, and generally need to be supplemented by springs to meet the loading elasticity. "Mechanical seal" is often referred to simply as "mechanical seal". A shaft sealing device for rotating machinery. Such as centrifugal pumps, centrifuges, reactors and compressors, and other equipment. Since the transmission shaft runs through the inside and outside of the equipment, there is a circumferential gap between the shaft and the equipment, and the medium in the equipment leaks out through the gap. If the pressure inside the equipment is lower than the atmospheric pressure, the air leaks into the equipment, so there must be a Shaft seal to prevent leakage. In petrochemical sealing plants, most fluids processed are flammable and explosive. Once the mechanical seal fails and leaks, it will not only pollute the environment, affect human health, but also cause major accidents such as fire and explosion. We mainly start with the selection of the sealing structure of the mechanical seal for the oil refining pump under different working conditions, so as to reduce the failure rate of the sealing operation and improve the reliability of the operation. 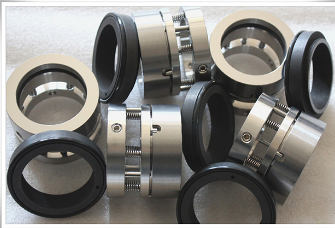 2. Machinery and seals for gasoline and diesel pumps

The anti-pumping ability of the mechanical seal of the light hydrocarbon pump is increased by different methods such as adding the length of the non-compensating ring tail and selecting the design and structure of the auxiliary back cover. The pressure of the seal cavity is required to increase by flushing to prevent the seal dry conflict caused by the flushing. The self-flushing method can not only ensure a higher working pressure of the medium in the sealed cavity of the system, prevent the environmental medium from vaporizing or the continuous accumulation of gas in the sealed cavity, but also help to take away the conflict heat generated by the conflict in time, which is useful The information controls the temperature rise of the end face of the sealing material, increases the liquid phase area, and improves the development of social conflicts.

Valves are an indispensable part of petrochemical refining equipment. The number of valves used is large. Most of the media in chemical production are corrosive, toxic or flammable and explosive.

With the continuous advancement of static sealing technology, the information and structure of finished rubber seals and gaskets have been rapidly developed. They are also widely used in various sealing fields, including petrochemical fields.