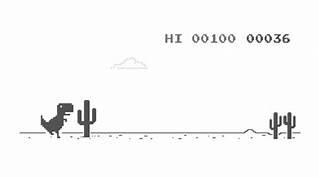 Now the game is no longer "like that" - since January 2016 there are new obstacles upon reaching 450 points - pterodactyls, and since May 2016 the night mode is turned on after reaching 700 points.

There's some good news: in 2018 a save feature that synchronizes with your Google account is available. The update is available in all browser versions over 72.1

In February 2020, a 3D version of the game was released. Now fans can enjoy the jumping of a green pixel dinosaur, but now a three-dimensional one, with background music as well.

Impact on the game industry

The popularity of Dino T-Rex prompted developers of other browsers to create similar games in their software. In May 2020, the Surf game appeared in Microsoft Edge. Players are invited to ride a surfboard on the waves, avoiding obstacles and kraken tentacles. And in October of the same year a similar game appeared in the Vivaldi browser. It's called Vivaldia.

Also in August, it was reported that the game can be hacked with a simple manipulation of the code. This allows the dinosaur to enter "god" mode, that is, to become immortal. After encountering obstacles, the game does not end, and the hero continues to run, as if nothing happened.

In that same August 2020, our beloved dinosaur got a small arsenal of weapons, time-slowing pills, and other interesting add-ons. WARNING! Some weapons can harm him himself. The modified version is called Dino Swords.

There are also amateur versions of the game, such as Modiji. It differs from the original by having Indian Prime Minister Narendra Modi as the main character.

Redditor user named The_Terrain provided an image of a Dino T-Rex dinosaur in the world of the popular Minecraft game. It is quite possible that it is planned to create a similar modification.

This Easter Egg is usually hidden on the No Internet connection error page in Google's Chrome web browser and played offline. Here, however, you can play the hacked Dino T-Rex Runner Game online and compete with other players. Press the space bar to start the game. Use the up and down arrow keys to control the dinosaur. Try to score the maximum points.

Please log in to like, share and comment!
Sponsored
Categories
Read More
Health
Protecting the lumbar spine can't be delayed any longer!
In recent years, most of the employees have continued to work from home. The biggest advantage of...
By Sebrina Solis 2022-06-05 12:58:22 0 9
Other
Enjoy the sensual and erotic dance with Karolbagh escorts
When you feel depressed and low in confidence then you need immediate care. These are the real...
By Rekha Shukla 2022-04-13 13:07:10 0 28
Health
Ischemic stroke Market Revenue - Global Industry Growth and Forecast – 2027
Ischemic stroke Market  2022 Ischemic strokes occur as a result of an obstruction within a...
By Vaibhav Warde 2022-03-21 09:21:50 0 26
Other
CGlobal LED Secondary Optic Market Analysis and Trends Competitors Analysis Forecast 2027
Global LED Secondary Optic Market is expected to grow at a CAGR of 18.73% during the...
By Krushnai Nirgude 2022-05-10 11:53:16 0 15
Networking
Global Intelligent X-ray Security Machine Market 2021 Opportunities, Key Players, Competitive and Regional Analysis to 2026
Global Intelligent X-ray Security Machine Market 2021 by Manufacturers, Regions, Type and...
By Shweta Patil 2021-12-16 16:15:56 0 132