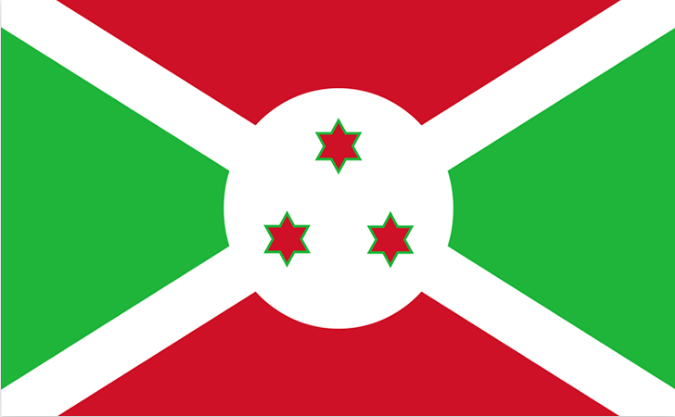 The ongoing Flag of Burundi was taken on when the country acquired its freedom from Belgium in the twentieth 100 years, yet has a set of experiences that originates before the frontier period. The flag of Burundi has changed more often than that of most different countries in Africa, yet it has consistently held a likeness to the country's verifiable flag.

The national flag of Burundi was taken on Walk 28, 1967. It comprises a white saltire which separates the field into substituting red and green regions. The focal point of the saltire converges into a white circle, on which there are three red strong six-pointed stars illustrated in green. The proportion of the flag was 2:3 until September 27, 1982. Imagery: The green tone represents trust, the white represents harmony, and red the people who fell in the battle for freedom. The three stars represent the three significant ethnic gatherings of Burundi: the Hutu, the Twa and the Tutsi[citation needed] The three stars additionally represent the three components of the national saying: Unité, Struggle, Progrès ("Solidarity, Work, Progress"), which should be visible on the Crest of Burundi.

Significance of the Burundi Flag

The Burundi flag is a white saltire that holds three red stars with green layouts and partitions the flag's field into four equivalent segments. The top and base segments of the field are red, while the left and right areas of the field are green. The white saltire addresses harmony, the green segments address the future, and the red areas address the blood that individuals of Burundi shed while they were battling for their opportunity. The three stars address the three ethic bunches that make up most of Burundi's populace and the three pieces of the national proverb.

History of the Flag of Burundi

The main known image of Burundi highlighted a portrayal of the karyenda drum, which was accepted to hold divine power in the country's conventional religion. The drum was an image of illustrious power in Burundi, and it just stayed on the flag while a government held control over the country. It was highlighted on the flags that originate before Belgian rule over Burundi and on the primary flag that the country utilised after it acquired its freedom in 1962. That 1962 flag was indistinguishable from the cutting edge flag with the exception of that it utilised the drum developing from a sorghum plant as its image rather than the cutting edge stars.

The Flag of Burundi changed in 1966 when the government lost powers. The insignia was taken out from the flag to make a progress flag that was used for two days until another flag could be made. The new flag included a sorghum plant without the drum as its insignia. The plant was decided to address the country because of its conventional significance in the country's farming.

That flag was supplanted by the cutting edge flag in 1967 to utilise a plan that better addressed the country's kin. The Flag of Burundi has not changed from that point forward, and it stays well known with the Burundian public.

Rise is a central point in Burundi's environment, significantly directing its tropical people. The country's for the most part high height creates moderately cool temperatures, which normal something like 70 °F (21 °C) all through the year in the focal level region and ordinarily drop to under 60 °F (15 °C) around evening time. Below the yearly normal is just marginally higher — for instance, at Bujumbura in the Imbo valley. Yearly precipitation, which averages 60 to 70 inches (1,500 to 1,800 mm) in the most elevated lying regions, is something like 40 inches (1,000 mm) on the shores of Lake Tanganyika. There is a short dry season from May to August.