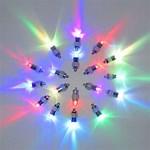 According to the report “Global Micro-LED Market Outlook, 2027”, published by Bonafide Research, the Micro-LED market is anticipated to grow at a CAGR of more than 81% in value by the end of the forecast period. Increasing demand for premium electronic products like smartphones, Near-to-eye Devices (AR and VR), televisions, smartwatches are key drivers of the Micro-LED market during the forecasted period.

MicroLED also called mLED or µLED, is an emerging technology that consists of arrays of tiny LEDs forming the individual pixel elements. Micro-LED is a self-emitting technology that uses very microscopic LEDs. It uses a TFT (thin-film transistor) circuit to control every single pixel which is the same as other display technologies. Unlike LCD, a self-emitting display does not require a backlight. Compared to widespread LCD technology, Micro-LED displays offer higher contrast, response times and reduced energy requirements compared to conventional LCD displays and also offer pixel-level light control and a high contrast ratio.

MicroLED technology was first introduced in 2000 by the research group of Hongxing Jiang and Jingyu Lin of Texas Tech University during they were at Kansas State University. Following the first report of electrical injection MicroLEDs based on indium gallium nitride (InGaN) semiconductors. Various on-chip connection schemes of MicroLED pixel arrays have been employed allowing for the development of single-chip high voltage DC/AC-LEDs to address the compatibility issue between the high voltage electrical infrastructure and low voltage operation nature of LEDs and high brightness self-emissive micro displays.

In 2012, Sony Corporation demonstrated the first micro-LED TV (55", Full-HD) which they named as Crystal-LED but it was never reached the market, in 2016 the company launched its large-area outdoor micro-LED displays which termed as a Canvas Display. After two years, Samsung was the first company to lunched MicroLED to the consumer market called “The Wall”. In the past few years, consumer interest and demand for large screen TVs has continued to grow rapidly.

In Global Market, the Asia Pacific region is leading the market and has the fastest CAGR throughout the forecast periods. China and South Korea are the leading countries in the Asia Pacific region. Followed by the Asia Pacific, North America is contributing around 37% in 2021. The Micro-LED market is segmented based on applications such as display and lighting. The major application of Micro-LED in the display is Near-to-eye Devices (AR and VR), Television, Smartphone & Tablet, Monitor & Laptop, Head-up Display, and Digital Signage. NTE devices such as AR & VR are contributed more than 25% in 2021 and led the market share in the forecasted period. Currently, By the End-user segment, the consumer electronics industry is leading the market throughout the forecast period and contributed approx. 56% in MicroLED Market.

Impact of Covid-19 on Micro-LED market: In 2020, a sudden outbreak of the COVID-19 pandemic has impacted the demand for Micro-LED globally. In the same year, the micro-LED market reported negative growth due to the imposition of lockdown in almost all the major countries which is disrupted the supply chain, halted manufacturing activities, and impacted research and development activities, resulting in delayed production.

Considered in this report

Aspects covered in this report

Regions covered in the report

By Panel Size in the report:

By Application in the report:

By End User in the report:

The approach of the report: This report consists of a combined approach of primary as well as secondary research. Initially, secondary research was used to get an understanding of the market and listing out the companies that are present in the market. The secondary research consists of third party sources such as press releases, annual report of companies, analysing the government generated reports and databases. After gathering the data from secondary sources primary research was conducted by making telephonic interviews with the leading players about how the market is functioning and then conducted trade calls with dealers and distributors of the market. Post this we have started doing primary calls to consumers by equally segmenting consumers in regional aspects, tier aspects, age group, and gender. Once we have primary data with us we have started verifying the details obtained from secondary sources.

This report can be useful to industry consultants, manufacturers, suppliers, associations & organizations related to Micro-led & LED industry, government bodies and other stakeholders to align their market-centric strategies. In addition to marketing & presentations, it will also increase competitive knowledge about the industry.

About us: Bonafide Research is one of the fastest growing market research and consulting company. We are expert in syndicated research reports & custom research solutions across the domains. We have been closely working with fortune 500 clients by helping them in tracking the constantly changing market scenarios.